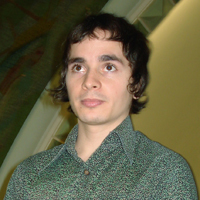 Abiuro is a Brazilian based studio running since 2005 founded by Alexandre Braga (art director, designer and illustrator). Alexandre studied graphic design at Panamerica School of Art and Design, and started working in 2000. After working in some graphic design studios and with advertising he decided to start Abiuro.

Nowadays he has been doing creative, art direction and illustration in different medias for a considerably number of clients, sharing the reponsabilities of the the studio with his wife and art director Marina Meirelles. They already work for clients like MTV, AlmapBBDO, Computer Arts, Fiat, Haagen-Daz, Absolut, DM9DDB, Havaianas, and magazines like Vogue, Trip, Bravo, Playboy, among others.

Their work has also been featured in some books and magazines around the world like It's A Matter Of Illustration by Victionary from Hong Kong, Characters Encyclopedia by Pictoplasma from Berlin, Semi-Permanet by Design Is Kinky from Sydney, Dos Logos by DGV from Berlin, Faesthetic from Ohio and Rojo from Barcelona.